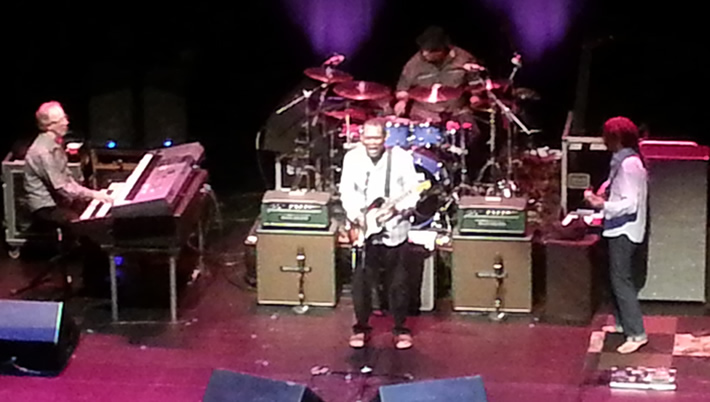 The Robert Cray Band has been playing and recording together for decades. The internal musical dynamics are plain to see in their live performances, as they are obviously at ease despite the looseness of their set list and their penchant for going off on extended jams. Relaxed and intense aren’t usually used to describe a single performance, but that is what sums up the band’s recent performance at the Whitaker Center in Harrisburg, PA .

A five-time Grammy Award winner, Robert Cray delivers a purely original, natural ease in his performance. He isn’t flashy, he just gets up there and delivers his brand of soulful blues. His style at once pays homage to the traditional genre while using interesting and original song arrangements and changes in intensity to forge a sound which is completely unique.

A native of the Pacific Northwest, a young Robert Cray made his first notable bid into show business as the un-credited bass play in the fictional “Otis Day and the Nights” in the movie Animal House. Around the same time (the late 1970s) he formed the Robert Cray Band and, after several years of regional success, was signed to Mercury Records in 1982. Since then he has released a score of studio and live albums, with 1986’s Strong Persuader being his commercial breakthrough. Along the way in his extensive career, Cray has performed with the likes of Eric Clapton, John Lee Hooker, Buddy Guy, and Stevie Ray Vaughan. In 2011, Cray was inducted into the Blues Hall of Fame.

Onstage Cray provided all guitars and lead vocals and was joined by Dover “Cliffy” Weinberg on keyboards, drummer and backing vocalist Les Falconer and a barefoot Richard Cousins on bass. Throughout the twelve song set and two encore numbers on this particular night, Cray drew from nine of his own albums performing only 2 covers, “Sitting On Top of the World” from Misissippi Sheiks and “Your Good Thing” by Lou Rawls. Other song highlights include the blues guitar opener “Phone Booth”, the cool keyboard/organ and soulful vocal of “Poor Johnny” and the “torch” song “Time Makes Two”, which is wrought with emotion.

One thought on “Robert Cray at Whitaker Center”