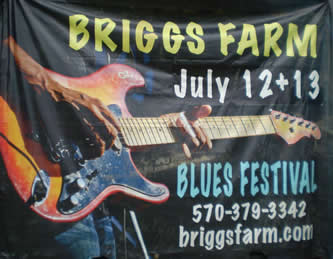 Located in Nescopeck Township, PA, Briggs Farm holds its annual Blues Festival each July. This ever-growing, two-day festival is open to all ages, priced relatively cheap, has free parking, camping, and let’s you set up your own picnic area on their large, amphitheater-like lawn. There are two stages with simultaneous music and plenty of food and craft vendors on site, including Briggs world-famous, farm fresh roasted sweet corn and plenty of “soul food” to compliment the blues music. They even offer a free hayride through the farm to take in the rural scenery of the beautiful Luzerne County valley.

Like previous years, the 16th annual festival of 2013 featured a mixture of National, Regional, and International Blues Bands.