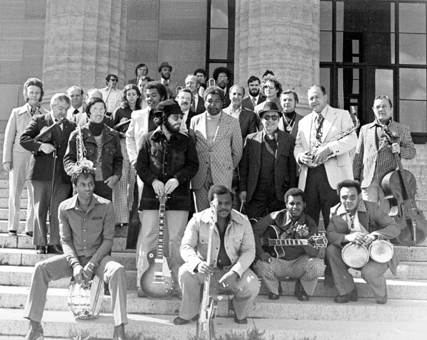 The Philadelphia Music Alliance Walk of Fame, a living tribute to Philadelphia’s rich music history along the Avenue of the Arts, will welcome nine new inductees next month. Led by “soul monsters” MFSB Orchestra, the Salsoul Orchestra, and John Davis & the Monster Orchestra, the musicians, string, horn, rhythm players and voices who performed the music were men and women, young and old and from all backgrounds who collectively captured a moment with their talents to make that sound world-famous in the 1970s. “Dean of American Folk DJs” Gene Shay; producer and label executive Joel Dorn; songwriting team Madara & White; producer-songwriter-publisher Jerry Ross; producer-arranger-conductor Vince Montana Jr., and Macy’s Grand Court organist Peter Richard Conte also will be honored as recipients of the 114th through 122nd commemorative bronze plaques along the Avenue of the Arts. Ceremonies, free and open to the public, are scheduled for Thursday, October 24th at Noon in front of the Doubletree Hotel along the Avenue of the Arts.

The induction of this diverse group of legends furthers the renewed commitment by the Philadelphia Music Alliance (PMA) to shed new light on the City’s cultural legacy and incredible contribution to the world of music past, present and future as a major tourist attraction. This agenda to recognize more local music greats in all genres is part of the community based, non-profit organization’s overall mission to encourage the creation, celebration and historical preservation of Philadelphia music, and the foundation of a renewed commitment to schedule multiple induction ceremonies each year.

Karen Lewis, executive director of the Avenue of the Arts (AAI), said,

We’re excited about the ongoing resurgence of the Walk of Fame as it represents a unique opportunity to recognize Philadelphia legends. And as the premier destination for performing arts, the Avenue of the Arts is the perfect location for this tribute…”

MFSB Orchestra – Motown had the Funk Brothers, but Philadelphia International Records had MFSB (Mother Father Sister Brother), the pool of more than 30 studio musicians based at Philly’s famed Sigma Sound Studios. The orchestra was created by Kenny Gamble, Leon Huff and Thom Bell, and backed up such artists as Harold Melvin & the Blue Notes, the O’Jays, the Stylistics, the Spinners, Wilson Pickett, and Billy Paul. The Philadelphia Music Alliance sends its condolences to the family of Bobby Martin, a top arranger, conductor and composer for MFSB, often referred to as “The Granddaddy of R&B and Soul,” whose passing was announced earlier this week.

Salsoul Orchestra – Consisting of most of the original members of MFSB, they became the backing band for acts on Salsoul Records, and recorded several hit singles and albums between 1975 and 1982. Their music featured elements of Philadelphia soul, funk, Latin and disco. The Salsoul Orchestra included up to 50 members with instrumental sections, arrangers and conductors. The Salsoul Orchestra was conducted by Vincent Montana, Jr., who passed away earlier this year amid plans for his Walk of Fame induction. Their song, “Love Break (Ooh I Love It)” has been sampled in several rap songs and most notably, in Madonna’s “Vogue.”

John Davis & the Monster Orchestra – A disco band noted for their lead member (John “the Monster” Davis), who lent his name and produced all of their output. The title track from their 1976 debut album, a cover of Cole Porter’s “Night and Day,” is now a classic Disco hit and on almost every DJ’s playlist. Original disco hits followed, including “Up Jumped the Devil,” “The Magic is You,” “Ain’t That Enough for You” and “Love Magic.”

Vince Montana Jr. – The producer, arranger, conductor and legendary vibraharpist was a key MFSB rhythm section member and developer of “The Philly Sound,” creator of the Salsoul Orchestra, Montana Orchestra and Goody Goody. As the creative and driving force behind the Salsoul Orchestra, Montana was a dance pioneer of the Disco Era, and created signature club classics on his own Philly Sound Works label, with countless gold and platinum albums to his name.

Gene Shay – WXPN‘s Grandfather of Philadelphia Folk Music and Dean of American Folk DJs has produced weekly folk radio shows in Philadelphia for 51 years, and is a founder of the Philadelphia Folk Festival and the Philadelphia Folksong Society. He was the first promoter to bring Bob Dylan to Philadelphia and as an advertising writer and producer, wrote the original radio commercials for Woodstock. Shay came up with the name “World Café” for David Dye’s nationally syndicated radio show, produced at WXPN, where he continues to produce his live weekly “Folk Show” every Sunday.

Joel Dorn – One of the most prominent producers in pop and jazz, Dorn helmed records from some of the biggest names in music, among them Charles Mingus, and the Allman Brothers Band. He began his career in 1961 as a disc jockey with Philadelphia jazz station WHAT-FM; and gained fame as a producer and A&R executive at Atlantic Records, producing Roberta Flack hits “The First Time Ever I Saw Your Face” and “Killing Me Softly”; the Keith Jarrett & Gary Burton album; and Bette Midler’s debut album, The Divine Miss M. Other performers Dorn worked with included the Neville Brothers, Leon Redbone, Lou Rawls, and Asleep at the Wheel.

Madara & White – Best known for transforming a song called “Do the Bop” for the Juvenaires into “At the Hop” for Danny and the Juniors, and the rest is history. Johnny Madara and Dave White went on to contribute to more than 200 million in sales with hits like “Rock and Roll Is Here To Stay” (Danny and The Juniors), “The Fly” (Chubby Checker), “1-2-3” (Len Barry) and “You Don’t Own Me” (Lesley Gore).

Jerry Ross – Record producer, songwriter, publisher and record company executive, Ross is credited with discovering Kenny Gamble as a teen and later collaborating with Gamble & Huff on the Motown smash, “I’m Gonna Make You Love Me”, recorded most famously by Diana Ross & the Supremes together with The Temptations. Ross also discovered, wrote or produced such million-sellers as “Sunday Will Never Be the Same” (Spanky & Our Gang), “Apples, Peaches, Pumpkin Pie” (Jay & the Techniques), “Sunny” (Bobby Hebb), “Venus” (Shocking Blue) and many more. Next to Cameo/Parkway and Gamble & Huff, Jerry Ross has written, developed and produced more hit records than any other Philadelphia producer.

Peter Richard Conte – The longtime Macy’s Grand Court Organist was appointed in 1989, and is only the fourth person to hold that title since the organ was first played in 1911. Mr. Conte is highly regarded as a skillful performer and arranger of organ transcriptions. His monthly radio show, The Wanamaker Organ Hour, airs on the first Sunday of each month and can be heard worldwide via the Internet at WRTI.org.

The Philadelphia Music Alliance was founded in June 1986 as a community based, not-for-profit organization dedicated to the preservation of Philadelphia as a vital contributor to the international music landscape. The Alliance also serves as a resource to students, educators, musicians, city agencies, and other cultural institutions. In 2008, the Philadelphia International Airport unveiled an exhibition spotlighting the Walk of Fame and the City’s contribution to American music to visitors from all over the world. The Walk of Fame is a stunning demonstration of the great talent that Philadelphia has produced. This talent spans many musical genres and time periods, and includes Leopold Stokowski, Frankie Avalon, the Dixie Hummingbirds, Patti LaBelle, Hall & Oates, Solomon Burke, Marian Anderson, Mario Lanza, John Coltrane, Todd Rundgren, McCoy Tyner, Kenny Gamble, Leon Huff, Teddy Pendergrass and Dick Clark.