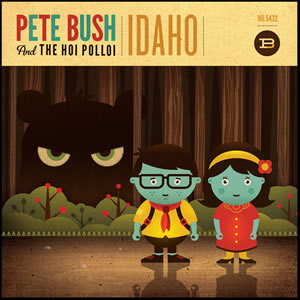 This review was originally published at DAMES Of PA.

Pittsburgh’s Pete Bush got his start playing guitar in a hard rock band in the late 1990′s before making the radical transformation to stand-up bass in a “jazz-sex-pop” band called Salena Catalina. He next moved up to frontman when he formed Pete Bush & the Hoi Polloi, a jazz/fusion trio with whom Bush provides vocals, guitars, and various other instrumentation. Idaho was released by the group last May and adds some nice sonic additions to the base live sound. This sound is an unsual blend of jazz, rock, blues, rockabilly, and even a hint of punk. Finding a specific genre in which to market their sound has been a struggle for the band from the beginning.

The 8-song album leaves no moment wasted for filler or throwaway tracks. The opener “Ceiling Mirror” starts the album off perfectly as a fusion of all the group’s styles, arranged masterfully for maximum effect of the rock parts. It gives the listener an immediate display of the range of styles present on the album. Other highlights of the album include the croning jazz ballad “Montebean”, the pleasant closing title song “Idaho”, and a couple of strongly Latin-influenced numbers, “Sacramemento” and “How Apropoe”, the latter of which is built on a choppy, electric guitar riff.

Even with the release of the album the band still looks forward to their live performances to express their passion for music. Still, Idaho simultaneously captures the rhythmic flow of a well produced studio album while maintaining a sense of spontaneous improvisation usually reserved for the live performance.