One More Jam for a Fine Rock Band 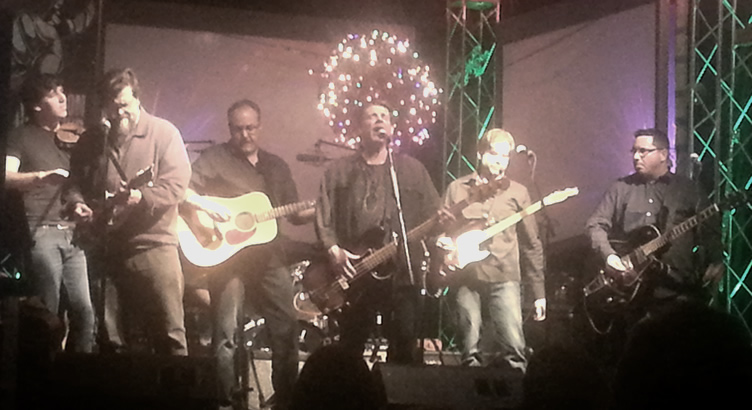 After 15 years together as a live act along with two fine original releases, HotWingJones‘ played their final show at the Harrisburg Midtown Arts Center on Saturday, February 27, 2016. For years, this group straddled the line between serious rock performances and lighthearted, slightly comedic entertainment and this performance was a distinguished way to close out their career.

Opening up for the group was Bret Alexander who was joined for most of his acoustic set by violinist Nyke Van Wyk. The two were band mates for a few years during the later era of The Badlees and they began the set with a couple of songs from the group’s 2009 album, Love Is Rain. An excellent rendition of “Drive Back Home” was followed by an accurate version of the orchestral “We Will”. Later on in the set, the duo performed a couple of inspired songs, “That Train” and “Vigilante for the Golden Rule”, from the Badlees’ most recent album, Epiphones and Empty Rooms. The set continued with some additional Badlees tunes and covers with the standouts being “Don’t Let Me Hide” and “A Change is Gonna Come”.

HotWingJones took the stage with their most recent five-man line up and started in with a cover of The Rolling Stones “Sympathy for the Devil”. Bassist and lead vocalist Andy Shemeta reminded the crowd that the group had been together for 15 years, stating that he answered and ad for a lead singer for a blues cover band “The Bluezers” and it has grown into the great experience that was HotWing Jones.

Through the rest of the night, various personnel arrangements played an incredibly diverse selection of original and cover tunes, including traditional tracks like “John the Revelator” and “The Battle of New Orleans” as well as a few Badlees tracks when Alexander joined the band onstage. There were also special sections of the show used to spotlight present and past group members. Multi-instrumentalist Corey Woodcock, who is moving on as the banjo player with the band Mountain Ride, took lead on a couple of his originals, “Reannin” and
“25 to Life”. Former guitarist Mark Burke joined the group on guitar and lead vocals on the covers “Feelin’ Alright” and
“While My Guitar Gently Weeps”, with some interesting four-part harmonies on the former. Guest Camilla Widad joined the band to perform her song “Candle” and then stuck around to provide backing vocals for much of the rest of the show.

The heart of the show featured some of the better originals by HotWingJones such as “Jambalaya Stew”, which features a funky guitar riff by Anthony Pepoli soon joined by second arpeggio guitar by Mark Levin. “Seniorita Blues” has some rattling percussion by drummer Steve Montresor, while “Dream Day” saw a good performance by a 7 piece ensemble. They also played the soulful ballad “Be My World”, which was the group’s first song to be featured on the radio.

As the show reached the end, all nine members of the ensemble (five group members and four guests) shepherded out the career of HotWingJones with a rendition of the Stones  “Let It Bleed”.

2 thoughts on “One More Jam for a Fine Rock Band”