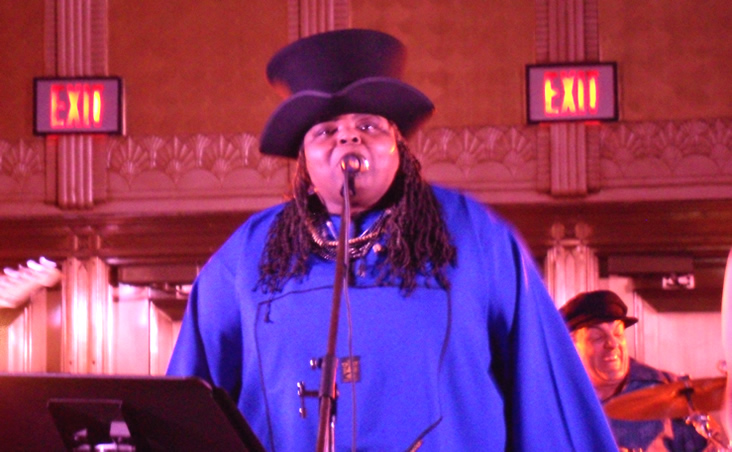 On Friday, March 31st, Alexis P. Suter Ministers of Sound celebrated the release of their new album Live From Briggs Farm with a concert at the FM Kirby Center in Wilkes-Barre, PA as part of the center’s Chandelier series. The album was recorded during the 19th annual Briggs Farm Blues Festival in Nescopeck, PA last summer and was released on the Briggs Farm Blues Records label.

The founder and organizer of the Briggs Farm Blues Festival, Richard Briggs, acted as MC for this show and during an interview after the music stated that Alexis Suter is one of the more impressive performers at his festival year after year. Some of us arrived early and were lucky enough to catch Alexis P Suter’s soundcheck and, although outfitted a bit differently than her usual cool, blouson outfit and top hat, when she sang “Bridge Over Troubled Water” and her commanding baritone filled the room we knew this was the same Alexis who rocked the Brigg’s Farm stage.

Wilkes-Barre natives Dustin Douglas and the Electric Gentlemen took the stage first and immediately displayed some professionalism during an equipment malfunction, as bassist Matt Gabriel and drummer Tom Smallcomb worked up a jamming groove that kept the crowd interested until the full music could get going. Once they got rolling, the band performed a solid 45 minute set of blazing blues rock, performing several songs from their 2016 self-titled album. Their energy and enthusiasm was contagious in the crowd and vocalist/guitarist Dustin Drevitch said that this power trio is planning to release a blues-based EP in the coming months, ahead of their set at this summer’s Briggs Farm Blues Festival.

Alexis P. Suter took the stage to a standing ovation, this crowd obviously had high expectations. She did not disappoint as her stage presence was a first class act with perfect timing and emotional execution throughout. Since the show was held in the Kirby Center’s Chandelier Lobby, it felt more intimate, like a private Briggs party with about 200 people in attendance. Suter shared the stage with a talented ensemble and even relinquished lead vocals for a tune or two, with various sub-genres explored making it all very diverse and interesting. She did musical tributes to recently passed on musicians James Cotton, Chuck Berry and Leon Russell, and even made comment on the late celebrity Chuck Barris, referring to him as “Rockin'”. During the encore, Suter performed an outstanding cover of the Beatles’ “Let It Be” with such emotion that she cried her eyes out.

Live From Briggs Farm by Alexis P. Suter Ministers of Sound is the second release on the Briggs label, the first was a live album by Jimmy “Duck” Holmes, which is currently nominated for Best Live Recording and Best Acoustic Blues at this year’s Blues Music Awards, which take place on May 11th in Memphis, Tennessee. Alexis P Suter has been nominated for Best Contemporary Blues Female at the same BMAs and Briggs expects Alexis’s album to possibly be nominated for future awards for her album.

One thought on “Alexis P. Suter at the FM Kirby Center”